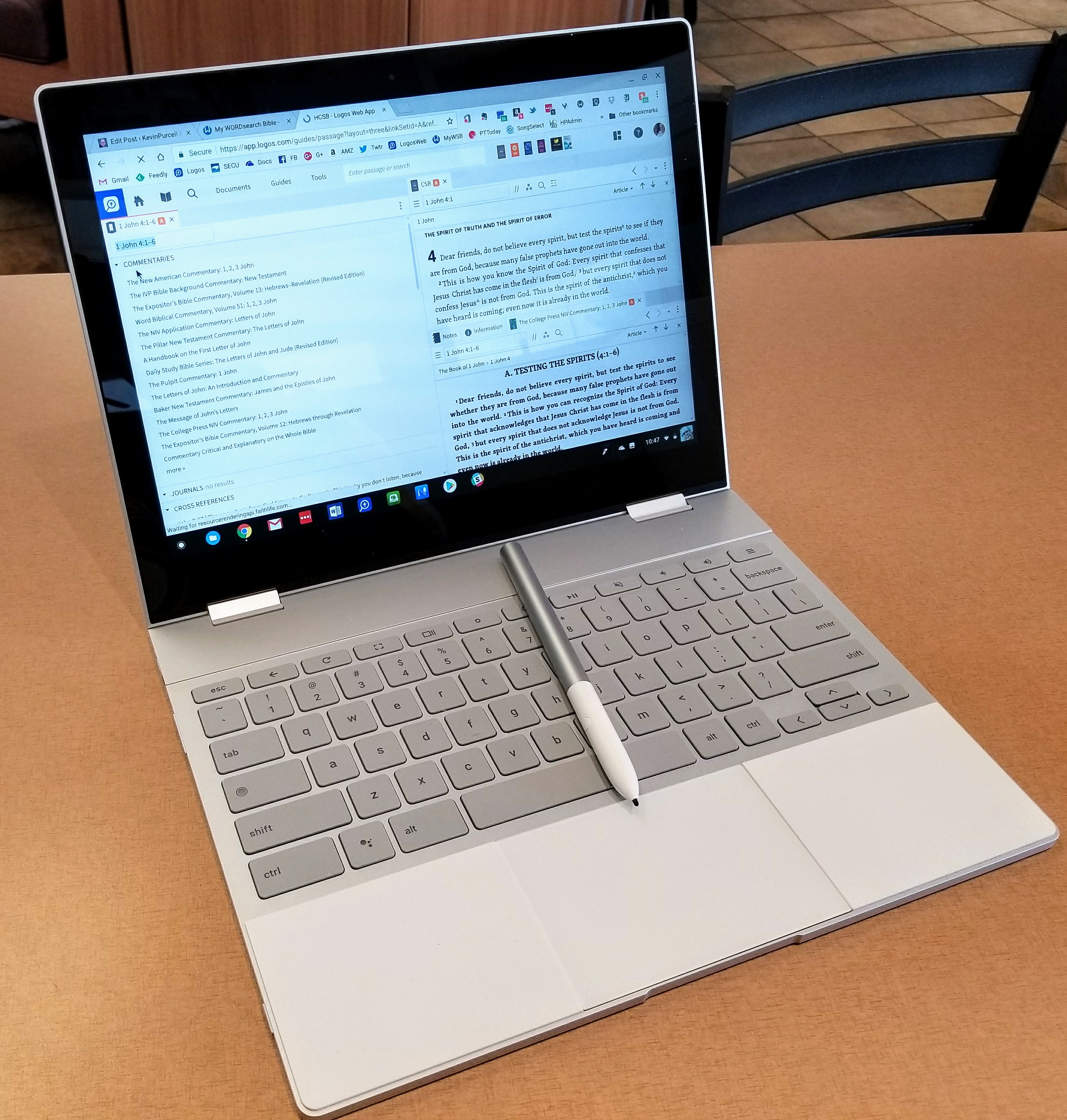 4nv
Paying $999 for a Chromebook, and $1,098 when you add the Google Pixelbook Pen, seems like a ridiculous extravagance for many of the mainstream tech site reviewers. I’ve seen reviewers say it was…

Let me say at the outset that I think these reviews all came from people who don’t fully understand the power and elegance of Chrome OS, so they can’t fully appreciate the benefits of a high-end Chromebook like the Pixelbook. We’ll step back to look first at the hardware. Then, we’ll see how the Pixelbook handles Chrome OS and apps from the Google Play Store, including using Bible study apps, which we already covered in a previous post.

In a word, the Pixelbook’s hardware is fantastic. I bought the base unit that comes with a 7th generation Intel Core i5 processor, 8GB of RAM and 128GB of fast solid state storage. Those sound like decent specs for a Windows machine, but Chrome OS runs on a pretty lean machine, so a 7th gen Intel Core i5 with 8GB of RAM works nicely on Chrome OS.

Over the years at Notebooks.com and GottaBeMobile.com I reviewed about a dozen Chromebooks. I’ve never seen a score of 29,238 on Octane before.

In addition to the blazing speed, the Pixelbook looks beautiful. It’s incredibly thin and light. Other devices claim the same weight, but Google engineered the internals in a wonderfully balanced way. When you hold it in tablet mode or just carry it around it feels sleek. Just look at the clean lines and clear attention to detail.

The computer includes 2 USB-C ports that will both charge and transfer data. They will also work as external display ports with an adapter.

Google put a Hardware Security Module in the Pixelbook, giving it a business class level of security. While a home user like me won’t really appreciate this, business users might.

Convertible designs give users versatility that a traditional laptop doesn’t. Use it as a laptop for regular work. Then fold the display back nearly 360 degrees to use it as a tablet.

Adjust the screen so that it faces forward in a V-shape or Tent mode as seen in the image above. We can also use the Pixelbook with the keyboard facing down and the screen facing forward in a mode useful for viewing videos or presentations. Display mode lets the user adjust the angle more easily than tent mode.

Before I began using the Pixelbook Pen, the Apple Pencil was the best stylus I’d used. However, I prefer the Pixelbook Pen because it’s shorter, thicker and feels better in your hand. Because of the shorter length it has a better weight distribution than the Apple Pencil. Both work better than the Microsoft Surface Pen, but not much. All three work great. Pixelbook users needing a stylus will get a great one with the Pen.

The Pixelbook Pen has a button on the side that turns on the Google Assistant when the user selects on-screen content. Users can search with voice commands using the special keyboard button but this doesn’t work with the Pixelbook Pen, which is stupid. The Apple Pencil doesn’t do anything like that. Surface Pen users can work with Cortana via the buttons. I like the right-click button of the Surface Pen and wish the Pixelbook Pen had the feature or let users customize the one button it does have.

The Apple Pencil lets recharges via the Lightning Port on the iPad Pro. That sounds like a benefit, but it also means you have to charge it more often. The AAAA battery in the Pens from Google and Microsoft last forever. When they finally do quit, just swap them out. They’re hard to find in my small town, but I ordered a four-pack replacement from Amazon for less than $10. Now I’ve got plenty of backups in my battery drawer at home.

The Pixelbook Pen doesn’t drop its connection like the Apple Pencil. I have to plug the Pencil into the Lightning port on my iPad almost every time I want to use it. I never have that problem with the Pixelbook Pen.

The Pen does a lot of great things. Google has a help article to name many of these cool functions, which I’ve listed below:

I’ve used plenty of terrible keyboards and great keyboards and I love the Pixelbook. It’s better than my MacBook Pro from 2013. I hate the new MacBook keyboards. The Pixelbook’s as thin as the new Apple MacBook and MacBook Pro with their butterfly mechanism keyboards, but feels superior when you type.

It’s easy to type accurately quickly for hours with comfort. The interesting soft silicon surface that flanks either side of the trackpad feels great while resting your palms. It’s a brilliant non-skid surface and I’m glad Google thought to put them their. I hope they don’t discolor too much over time. Cleaning them was easy after I got a bit of residue from a soft drink on my hands that I didn’t notice. I just wiped it with a damp cloth.

The keys have a hint of texture making them easy to type on. They’re back-lit, but the light is a little strange. They don’t look that great in light making it hard to see the key labels. In a dark room they look fine.

The keyboard layout’s perfect and the useful function keys along the top of Chrome OS does away with the ridiculous F keys on most computer keyboards. You don’t need them in Chrome OS.

Google added a couple of keys to the new layout of their Chromebook keyboard. First, there’s the Google Assistant key. We’ll cover that more below when we discuss the Assistant. There’s also a nice Launcher button in the spot above the Shift key on the left side of the keyboard. It functions similar to the Windows key on most Windows PCs. Tap the key and start typing the name of an app to show it and then tap or click to launch the app or web app. It also functions like a CAPS LOCK key for those who miss it using a key combination.

As effective as the keyboard works, the trackpad is better. I hate trackpads, so any computer that keeps me from pulling out my Bluetooth mouse has to be good. I paired my Logitech MX Anywhere 2 mouse with the Pixelbook the first time and used it for a couple of hours. Now it sits in my bag. I actually prefer the Pixelbook trackpad. It’s spacious, accurate and smooth.

I did have to turn off the tap to click feature of the trackpad in Settings. I’m a lazy typists who lets my wrist rest on the space beside the trackpads so my thumbs kept tapping the trackpad accidentally, so I turned off the feature. I don’t mind losing tap to click. I prefer to click when I use a trackpad.

When you use the Pixelbook in laptop mode and tap the screen, the hinges aren’t strong enough to hold the screen in place. It wobbles a bit. If you plan to use it as a touchscreen only for watching videos, display pictures or a presentation to a friend, then use the tent mode to keep this from happening. I’ve also gotten good at holding the top or sides with my other fingers as I tap with my thumb for quick taps while in laptop mode.

The 12.3″ LCD 2400 x 1600, which gives us 235 pixels per inch, looks beautiful. Text and images look crisp and color accurate. It’s bright enough that I mostly use it at 50% brightness except in bright rooms or sunlight. I don’t watch a lot of video on my laptops, but I can on the Pixelbook without compromise.

Natively, the Pixelbook comes out of the box running at 1280 x 800. That’s a little low, even at 12.3 inches. However, it worked fine while using it at this resolution.

Users can change to the native resolution of 2400 x 1600, but you won’t be able to use it that way for long because text looks too small to read (see below). I left it at 1280 x 800 (see above) until recently, when I switched to 1350 x 900. That makes things look smaller but not too small to read even for my middle-aged eyes. Everything still runs smoothly and I can fit more on the screen, a great option when using Bible apps on the screen with two books open at once. Since most Android Bible apps fill the entire screen on Chrome OS, the lower resolution works fine.

Like most laptops, the Pixelbook speakers aren’t great. The sound okay for occasional listening, but no one will want to use this device for a lot of music, gaming and movies if they put a premium on great audio. Get some excellent headphones and plug them into the audio port, which the Pixelbook has, thankfully.

Google Assistant will search the web, add appointments, tasks or notes to Google Keep. You can also control things on your Chromebook, launch apps and interact with the system.

The Pixelbook Pen lets you press the button and then circle something on the screen. The Google Assistant will then show relevant information based on what you circled. Here’s a list of some of the things you can do according to the Google help article:

The Apple Pencil can’t do many of these things and the Surface Pen can do some of them. Siri and Cortana don’t work as well in my experience as the Google Assistant for most tasks.

Chrome OS comes with a number of important benefits that a lot of people don’t see because they’re too focused on the limitations.

We do see some limitations with Chrome OS. It’s harder to do complicated video and photo editing. Running two apps on-screen at the same time doesn’t work yet in the stable version of the operating system. Google’s working on it.

I love my Pixelbook and feel like the $999 plus $99 for the Pixelbook Pen was a good investment. I’m productive with it writing article on my blog, writing sermons and Bible studies, researching my sermon and Bible study passages and doing general Internet tasks. I can edit photos most of the time since I’m not a serious photographer. Snapseed and the other online photo editing tools I use work fine with my Pixelbook. I also don’t do complex video editing. Most of the time I’m just cutting off the front or back of a video and splicing together a few clips that I then upload to Facebook or YouTube.

If you’re like me and want a great piece of hardware, then Pixelbook is your pick. It’s the best Chromebook money can buy. If you don’t want to spend $1000, then I can also recommend the Samsung Chromebook Plus or Pro, both also great Chromebook with an active stylus. The Samsung stylus is smaller and not as good as the Pixelbook Pen and it doesn’t have the Google Assistant built-in. The Samsung Chromebook Plus or Pro keyboards aren’t as good and the trackpads on both machines stink compared to the Pixelbook. The screens on those devices look as good, but I prefer the 12-inch nearly square 4:3 aspect ratio. Also the Pixelbook feel like a premium laptop and even works for occasional tablet use.

The Pixelbook works great for Bible study and sermon prep with only a few compromises. This boils down to your past usage and how much you need some of the more complicated features available on a Mac, Windows PC or even iOS with the iPad Pro. I prefer the Pixelbook for most of my writing tasks and even most of my online work.