A biblical writer might write the account of Logos Now that way, if we lived in those times. We don’t and this doesn’t rise to the level of biblical disaster, but the decision to do away with Logos Now hurt a lot of the Logos faithful and the outcry was great.

What Was Logos Now 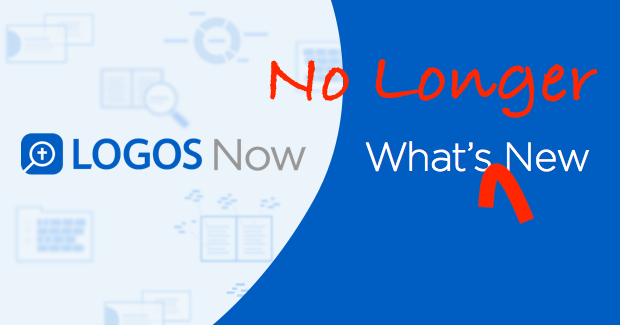 If you’re not a Logos Bible Software user, then you may not understand what I’m talking about. The software produced by the company formerly known as Logos Bible Software and now called Faithlife, led by former Microsoft employee Bob Pritchett, began a subscription service awhile back called Logos Now. Some who disliked the idea joking called the service, “paying to beta test new features” while others liked getting the new features before a major .0 update, like the upcoming Logos 8.0, which I’d expect sometime this summer or fall.

Logos Now included a bunch of things. the customers mostly like the getting new features NOW. Hence the name, Logos Now. About every 6 weeks the developers of Logos on both Mac and Windows released new tools or features in their desktop computer software.

People like me who love getting the latest greatest enjoyed the updates. It was fun to fire up your favorite Bible program and see that it was downloading something new. I’d rush over to the forums and find out what the new update included.

A lof the new features that came out were a bit obscure and not something I really used. Occasionally they’d hit on something that people really liked.

Included in these new features were the latest greatest version of Logos. So when version 7 came out, we didn’t have to necessarily pay to get all the new tools rolled into the program. We already had some of them, but others came along for the ride in our subscription that costs about $10/month at first and then later became $99/year.

To sweeten the deal, Faithlife threw in a few extras. At least that’s the way we saw it. Here’s what we enjoyed as subscribers:

That’s not a comprehensive list, but it includes the highlights. All that comes for under $100/year. I was happy. 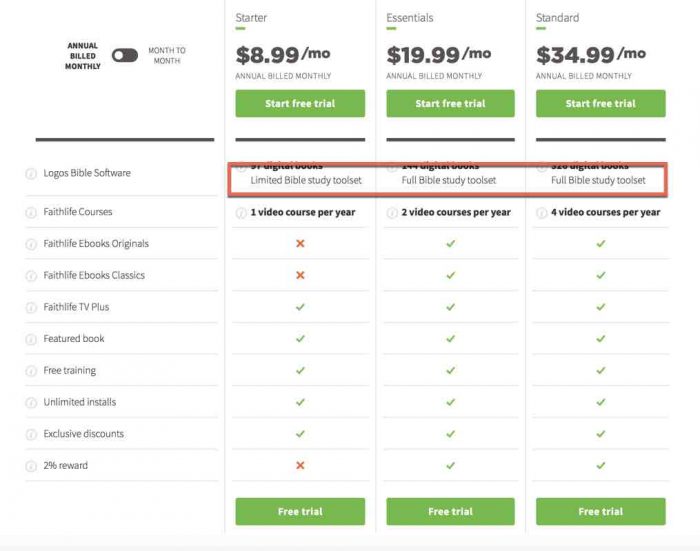 The change shocked many people, like me, who liked Logos Now. Why was this a problem? to get everything we enjoyed in Logos Now we’d have to subscribe to Faithlife Connect Essentials, a $19.99 subscription charged annually at about $240/year. So our subscription went from about $100/year to $240, a 140% price increase. They claimed it was better because it included services like…

Many of us didn’t see these things as a big benefit. Not enough to more than double the price. We just wanted to the new features NOW. The outcry was great, indeed. Just read the huge thread that followed the announcement.

In defense of Faithlife, they said that all Logos Now customers would get to keep their Logos Now features until their current subscription ran out or until early November 2018 whichever lasted the longest. I saw that some had paid up through 2019, so they would get to keep Logos Now for a long time still before having to decide what to do about the new service. 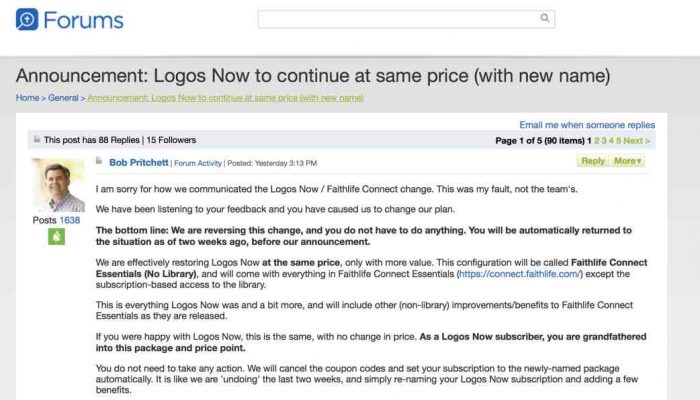 Faithlife CEO Bob Pritchett took to the forums and made a new announcement on Friday, March 2 entitled “Logos Now to continue at same price (with new name)”. He wrote:

I am sorry for how we communicated the Logos Now / Faithlife Connect change. This was my fault, not the team’s.

We have been listening to your feedback and you have caused us to change our plan.

The bottom line: We are reversing this change, and you do not have to do anything. You will be automatically returned to the situation as of two weeks ago, before our announcement.

This is everything Logos Now was and a bit more, and will include other (non-library) improvements/benefits to Faithlife Connect Essentials as they are released.

If you were happy with Logos Now, this is the same, with no change in price. As a Logos Now subscriber, you are grandfathered into this package and price point.

The ensuing thread filled up quickly with people thanking Bob for the change.

What Should You Do?

If you were a Logos Now subscriber, you have to decide what to do next. Here’s a list of possible responses to the situation.

For now, I’m doing two things. First, I’ve decided to take the next 8 months and consider whether the new Faithlife Connect Essentials (No library) will best meet my Bible study software needs. Before all of this, I was a fairly committed Logosian. Now I’m not as sure and feel a little uneasy about the company. I was planning to jump ship entirely before they reversed their decision, so they did at least temporarily keep me as a user.

Second, I plan to get more proficient with Accordance Bible Software. They seem to offer the best solution for my needs.

I still struggle with a few things. Logos syncs with other platforms except their web app exceptionally well. Accordance relies on Dropbox and on mobile you have to do this manually and their Android app’s too new to even include sync of notes, highlights and other user-created tools. The notes features in Logos are better than Accordance. They offer better text formatting and will automatically create Bible verse links when they’re typed. I don’t have to manually add the link to turn a Bible verse into a pop-up or hyperlink. The diagramming tool in Logos is great and Accordance doesn’t offer an analog.